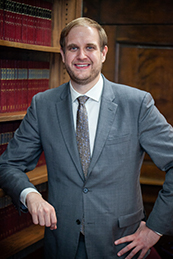 Nick articled with Middlebro' & Stevens LLP, and returned to the Firm after his call to the bar in 2015. Nick practices in the areas of labour and employment, municipal law, general litigation, wills and estates, corporate law, and real estate. Nick is also a Provincial Offences Prosecutor in several municipalities in Grey-Bruce, various ministries, and other government agencies.

Nick is the President of the Grey County Law Association and the current Board Chair at the United Way of Bruce Grey where he has been a Director since 2014. When not working he enjoys playing bass guitar, reading, hiking the Bruce Trail, and spending time with his family.